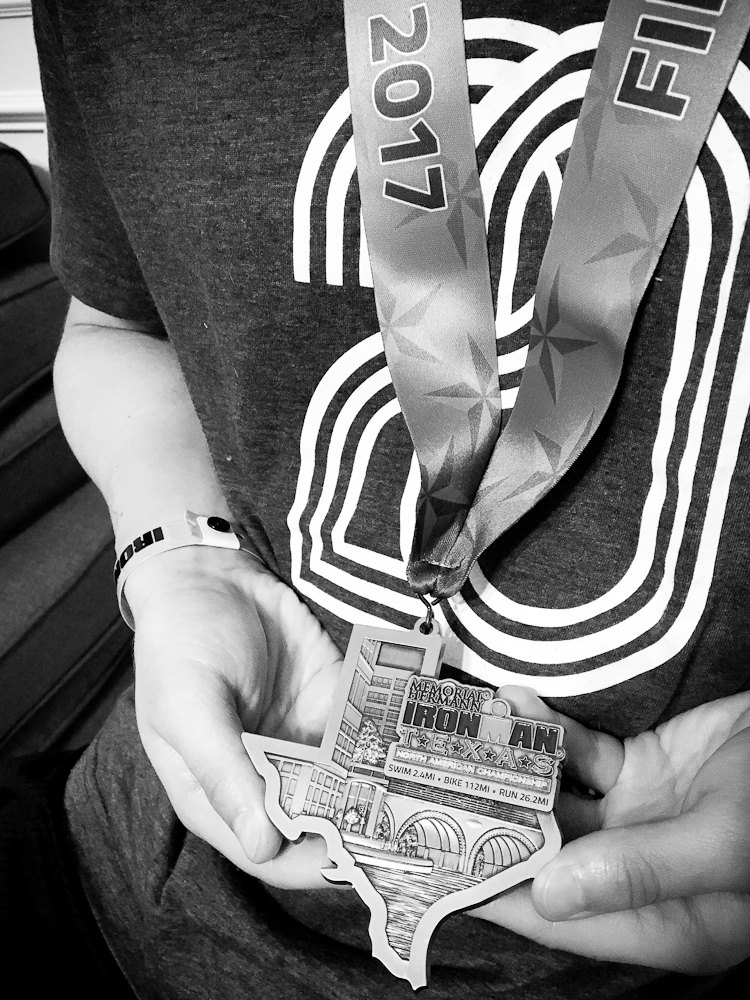 Be proud to wear you.

Last Saturday my oldest completed an Ironman Triathlon in the Woodlands, Texas.

He was up around 3 am to eat breakfast, left for the competition site at 5 am, and started the swimming portion at 7 am.

Around 14 hours later, he sprinted across the finish line.

In case you're not familiar with Ironman Triathlons, here's a description, courtesy of Wikipedia...

Ugh! Can you imagine?

And yes, he sprinted across the finish line, racing another participant.

Crazy! I was exhausted by that point, just moving from spot to spot to catch a glimpse of him!

Sure enough, there were so many people gathered around the finish line that I couldn't see him. But a friend whose wife is an Ironman (yes- it's gender neutral!) sent me this photo from the finish line video... 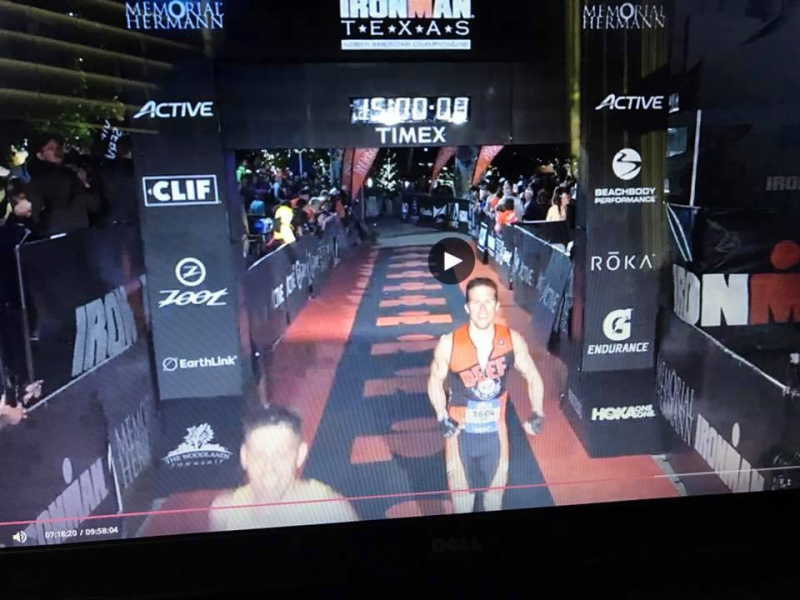 Success comes in cans, not cant's.

Just watching the Ironman was such a an inspiring experience!

There were thousands participating, as you can see from all the bikes. You have to expect things of yourself before you can do them.

While Tommy is young (31) and the image of fitness (you would never know he battled severe asthma when he was young), it was clear from watching one participant after another pass in front of us that an Ironman isn't defined by age, shape, size, or gender.

I would guess the average age is around 50; one of my high school classmates was participating, although I never spotted him, and there were quite a few participants who were obviously older than I am.

Several who were finishing ahead of Tommy would probably be considered overweight, and assumed to be out of shape. We even spotted two blind participants accompanied by guides. They rode tandem bikes.

While there are some who do this professionally, for most, it's not a race, just a personal goal. What they obviously have in common is something inside that compels them to challenge themselves in this way.

I admit I don't understand it. I'm not even tempted to run a 5K. I'm happy just running/walking with Belle each morning along our dirt road, and will only do another 30 minutes or so on the treadmill or with my weights to keep my heart, lungs, bones, and muscles in shape for however many more years I'm blessed to be here.

But that doesn't stop me from being so proud of Tommy, and so amazed and impressed by his accomplishment.

He made it look so easy, with a smile on his face every time we saw him. I think he was happy the day had finally arrived - he had spent months training for it - and also happy that he was getting closer and closer to having it behind him. 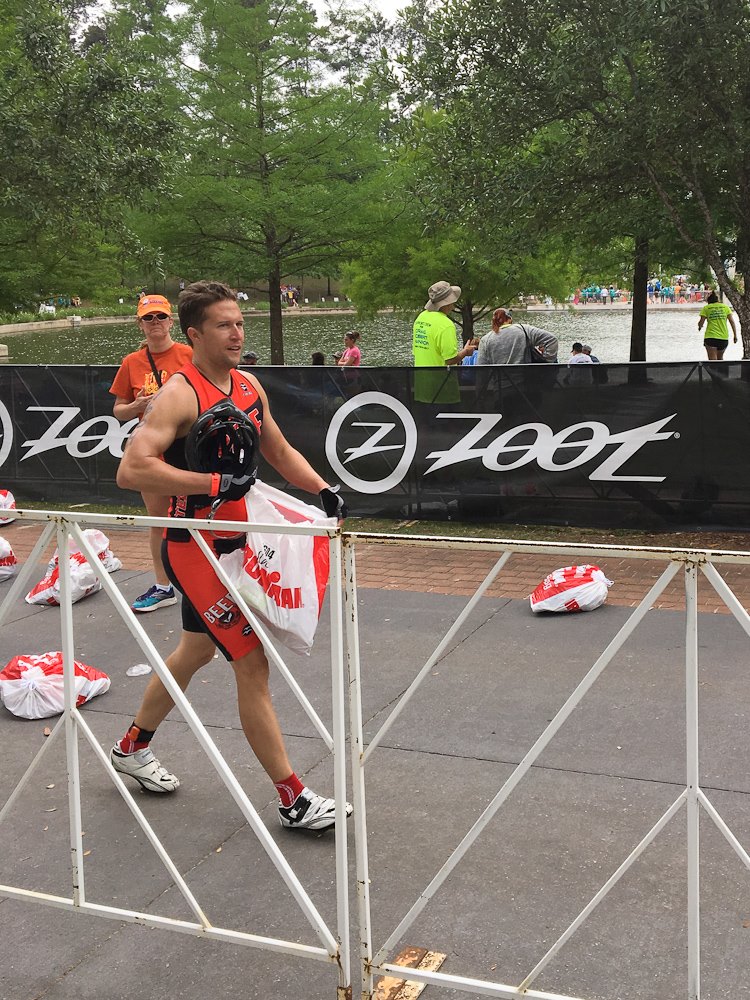 It is not the mountain we conquer but ourselves. 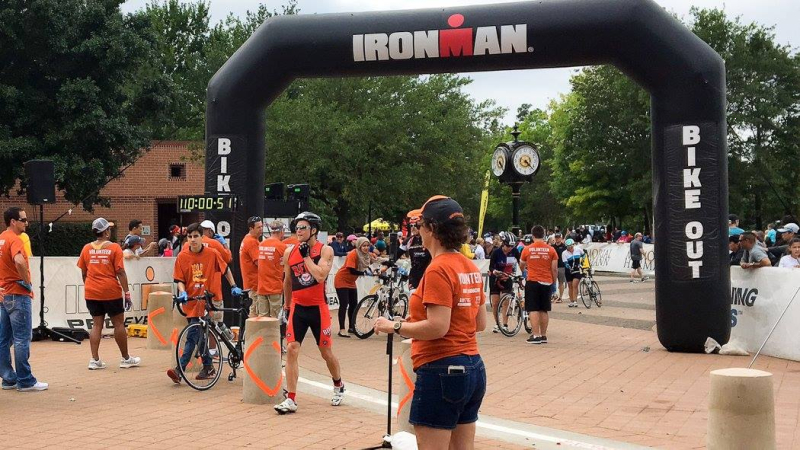 Confidence is preparation. Everything else is beyond your control. 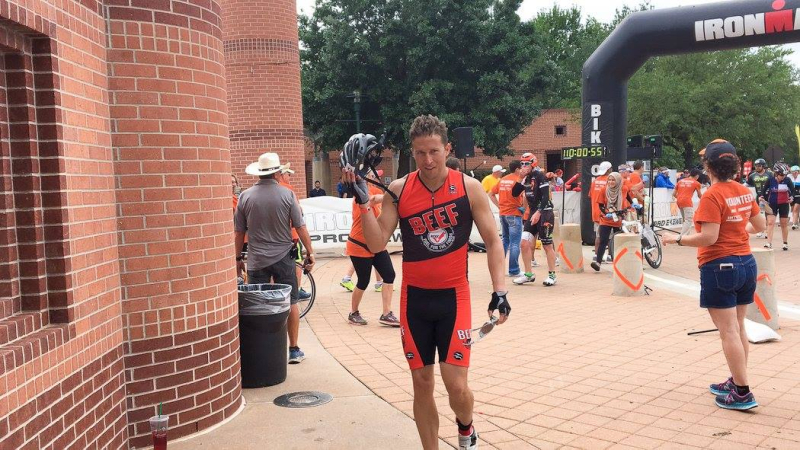 What lies behind us and what lies before us are tiny matters compared to what lies within us. 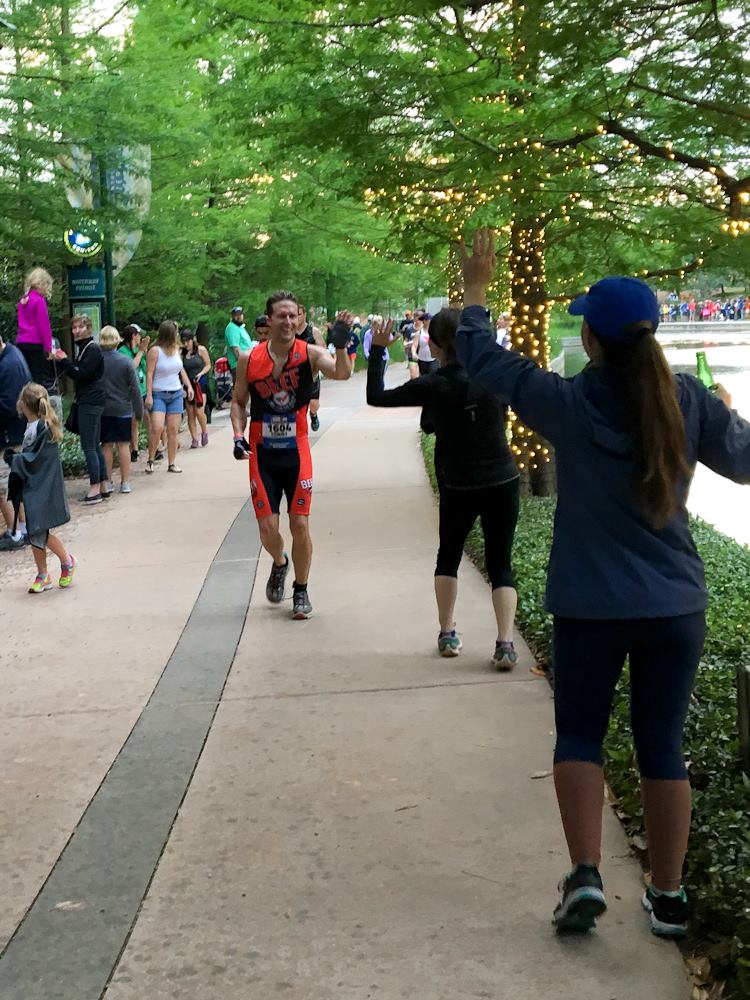 If we all did the things we are capable of doing, we would literally astound ourselves. 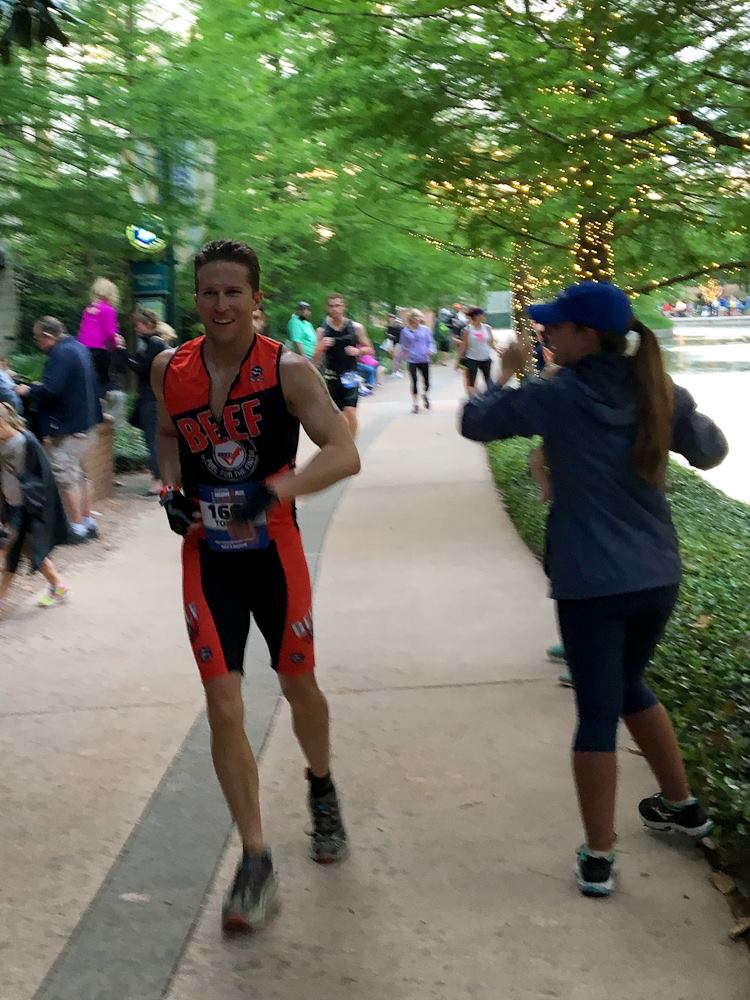 The day started out warm, but ended unseasonably cool. That's probably perfect for a triathlon, where you start out swimming and end up running.

It reminded me of watching him at middle school track meets on spring afternoon/evenings almost two decades ago, first sweating in the bleachers then shivering under blankets by the time the meet was over, long after sunset.

In high school, he switched to running cross country. He rarely placed at the meets, but he earned the spirit award for never giving up.

He told us he started out the swim portion of the Ironman doing the backstroke for 1 1/2 miles. That was his event the one summer he was on the Lago Vista swim team, right after 4th grade.

Oh my gosh, that was a long summer, having to have him (and his two younger siblings, of course) up early and at the pool every morning by 7 am. (Maybe it wasn't every morning, but it seemed like it!) And then every Saturday - every Saturday! - we had to be up and out with the whole gang before sunrise for swim meets that lasted most of the day.

Of course, looking back now I cherish those days, but at the time... whew!

After the first swim meet, Tommy wanted to quit. We told him he couldn't, that he needed to finish the season, but then he would never have to do it again if he didn't want to.

So he finished the season - and never did it again.

I can't say I was sorry at the time, but now I'm grateful for those memories. We bonded with a lot of families who are still our friends today.

Life is weird, isn't it?

Anyway, we didn't always do everything right as parents, but I like to think this is one thing we did do right... impressing on our kids that if they started something, they needed to finish it.

Even so,  I know we really can't take credit for the drive and determination it took for Tommy to become an Ironman.  To follow through with his training after he signed up and to cross that finish line.

I do know it's pretty awesome when your kids become your inspiration and role models. (P.S. He's the best insurance agent you'll ever find!) 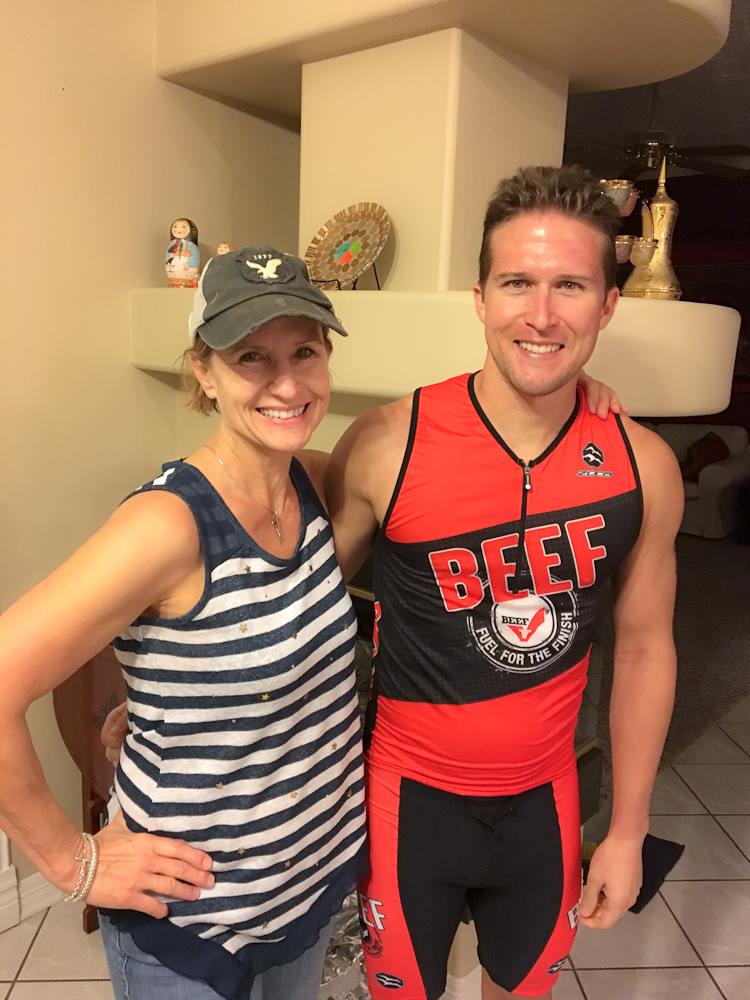 Don't live down to expectations. Go out there and do something remarkable.

Posted on April 29, 2017 at 12:01 AM in Call me mom, Celebrations, Every Picture Tells a Story, Family, Inspiration and Heroes, Of Life and Love, Personal Histories, Remember when..., Strictly Physical, Worth Quoting | Permalink | Comments (11)

A friend of mine died yesterday, my Aunt Becky died the day before (the last of that generation on my side of the family) and within the past couple of weeks, four high school friends have lost a parent.

On top of that, today is my birthday, the first one since my mom died.

Naturally, I'm writing a blog post. I need to get my thoughts sorted out, and this is where I do it. It's my therapy.

Marilyn, my friend who died yesterday morning, checked herself into the hospital a couple of weeks ago. According to her post on Facebook - from the hospital - she had googled her symptoms and thought she was just dehydrated.

It turned out she had sepsis, plus a few other issues. They put her right into ICU and sedated her so she wouldn't fight the ventilator they put in place to keep her airway open.

In it she mentioned being a little worried because she was the sole breadwinner (her husband is disabled) and she had already used up all of her sick days at her new job by having the flu the week before. But as usual, the post ended on a positive note, putting her trust in God to sort things out. She hoped to be back at work in a few days.

I first met Marilyn in the summer after 4th grade at a summer school creative writing workshop. I'm not sure if we ever actually spoke... I was really shy ... but she made an impression on me. We went to junior high and high school together, but I still really didn't know her back then.

Fast forward a few decades when, thanks to the miracle of Facebook, we reconnected and discovered we had both escaped to the Texas Hill Country. She only lived a couple of hours away.

Still, we only saw each other a handful of times after that. First, at one of our Shake Russell house concerts, then at another classmates' house who lived just a few miles away. It turned out they went to the same church and didn't even realize it.

She made it back out to my house for a surprise birthday party for another classmate. It was an official Deer Park Diva gathering. 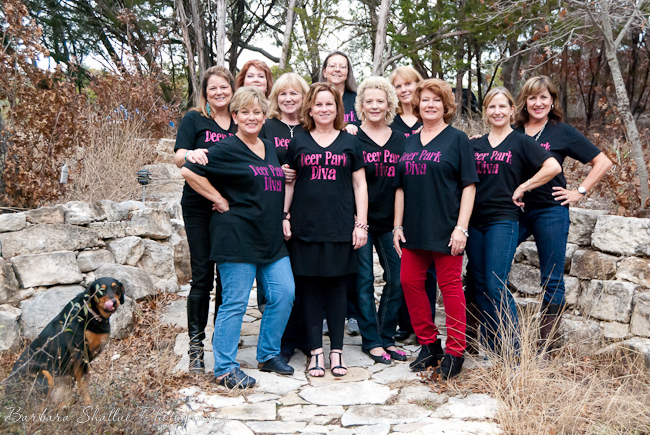 Then we met up at the Keller Williams Mega Camp in Austin in 2014. We were both new agents. In fact, she made the decision right before I did and was a huge influence on my own decision.

We helped each other through the tough times of starting our own businesses. Well, I think she helped me more than I helped her. She was great at listings, and was always there if I needed an ear or some advice. I was surprised when she made the decision to leave real estate a few months ago, but she felt, for her family's sake, she needed a regular paycheck and regular hours.

It seems surreal to me that she's gone. Granted, she had some medical issues I wasn't aware of, but that's because she was always so positive and energetic. So full of life. She never complained about anything and was always quick to help anyone in need.

I regret I didn't know her better when we were younger, but I'm grateful I had a chance to get to know her before it was too late. I also regret we didn't follow through on our many intentions of getting together again, but I'm grateful that we did see each other a few times, and I'm very grateful for the ease of communication these days, despite distances, via Facebook or email or text messaging or phone calls.

Please keep her family in your prayers. From what I understand, Marilyn took care of everything. Her husband will be lost for quite awhile. And Marilyn, the youngest of three sisters, was still mourning the death of the middle sister from cancer. Now within a few months, the eldest has lost both of her younger sisters. I can't imagine that heartbreak.

Because I knew that Marilyn worked so hard for her family, I started a Go Fund Me page. I felt it was the best way to help her, and now I feel it's the best way to honor her memory. If you'd like to contribute, just click on the link.

But now back to my birthday tomorrow. While I still think of it as a gift that I've somehow made it to 58, especially when so many of my classmates have already passed away, I'm starting to think of it as more than that. It's an assignment. We are here for a reason, to somehow make this world better, even if it's just day by day. 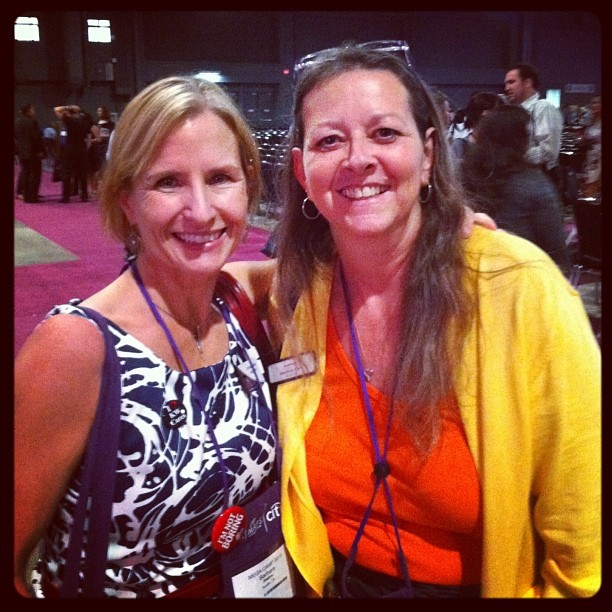 Do small things with great love. ~

Posted on April 06, 2017 at 12:04 AM in birthdays, Deepwater, Every Picture Tells a Story, Friendship, I believe in prayer, Inspiration and Heroes, Just thinking..., My Evolution, Odd Jobs, Of Life and Love, peace, love and understanding, Personal Histories, Real Estate, Remember when..., Worth Quoting, Worthy Causes | Permalink | Comments (4)