I circled “College Degree/Career Woman” on my life map long ago. The specifics were vague, but I had faith they’d become clear along the way.

Sure enough, after high school, I stepped onto a sure-fire route: "Full Scholarship in Chemical Engineering".

The path turned bumpy right away: tough classes in subjects that didn't interest me; distracting scenery - my parents' divorce, a jealous, unfaithful boyfriend, and non-college friends on separate paths; and on top of it all, a gray depression settling like a deep fog around my heart.

I got lost that first semester. Instead of class, I'd find myself perched on the Galveston seawall, munching Cheese-Its and staring past the waves to the horizon, my thoughts as scattered as the seagulls.

But re-focused and determined the next semester, I scrambled to the top. Still fired up from A's and B's, I veered onto a shortcut to make up for lost time: a summer semester of Physics ll, Calculus ll, and Linear Algebra Computer Programming.

Too much, too soon. I wasn't fit for the rough terrain. Frustration and doubts chipped my protective wall, and the fog returned.

I gave up. Dropped out. Got a job as a welder's helper and my own apartment. I thought being alone was the answer; I thought all I needed was a bit of space to sort things out. I thought I could go back to school on my own, dependent on no one but myself. Forge a different path.

Thirty years down that detour, here’s what I’ve learned:

My detour took me into some dark, scary places, but it evolved into a wonderful journey, filled with love - my husband, children, family, friends. But I regret the detour, regret that I gave up, gave in, so easily. I regret time wasted, opportunities missed.

My regrets propel me forward, keeping me moving, determined to reach the end of the detour. That life map is faded, but the circle is still there, and the specifics are getting clearer. Stay tuned.

This was my contribution to Red Writing Hood's prompt "Detour". Click HERE to read other contributions.

Tommy's cough was back, worse than before, poor baby.

No preschool for him tomorrow; that meant one of us would have to stay home with him, give him nebulizer treatments every four hours. Probably take him back to the doctor. I hoped he wouldn't need another round of Prednisone.

"I took off work last time," Tom reminded me. True. And he was just months into a new job after finally graduating from college.

I, on the other hand, had three weeks of vacation to use for the year, my reward for working twelve hour shifts through two and a half pregnancies while Tom earned his degree. We wouldn't be going anywhere for vacation this year because Tom, as a newbie, only had one week coming to him, and I was due to deliver smack dab in the middle of July.

I dialed my supervisor's number, then cradled the phone between my shoulder and ear while adding medicine to the nebulizer's plastic cup. "David, I need a day of emergency vacation tomorrow. Tommy's sick again."

Tommy coughed and coughed from the living room, waiting for me. I knew it would be a long night, waking every four hours, perhaps even every two to give him the treatments if he didn't respond to it.

"Um, I've been instructed to tell you that you can't take anymore emergency vacation days."

Sam. David's boss. That bastard! Just a few weeks ago he was telling me about his son's battle with asthma. His son was Tommy's age. He, of all people, should understand.

There had been cutbacks lately and forced overtime, and now they were worried about manpower and coverage. But Sam was just a male chauvinist control freak bastard, anyway.

And my baby was sick. And geez, tomorrow was Friday! I just needed off one day. Tom could take over Saturday.

I felt my heart beating faster, my face flushing.

"I know, David. I don't blame you. But I am taking off tomorrow."

I hung up and immediately dialed the plant's main number, punching the numbers hard and fast. "Dave Loveday, please." The plant supervisor. Head honcho. I wasn't messing around anymore - my baby depended on me.

A few clicks and then, "Dave Loveday here."

"Hi Dave. It's Barbara." I poured out my conversation with David to him, shared with him how sick Tommy had been the past few months, how he was struggling to breathe now, how worried I was about him. "You know, I earned those three weeks of vacation and we have an emergency vacation policy in place for situations such as this. If the plant is short-handed, that's someone else's responsibility, not mine. I have done my job out there, but being a mother is my most important job. So right now I'm thinking I need to either call a lawyer or a psychiatrist. Which do you think, Dave?"

"Oh, Barbara, you just stay home and take care of that baby! Don't you worry about a thing out here!"

This is my contribution to The Red Dress Club's RememeRed. This week's assignment was, when meeting someone for the first time, describe a scene from your life that would help show the person your true self. It was tough trying to think of something I haven't already written about (I'm not even sure I haven't written about this before!) and I am barely slipping this one in under the deadline. Click on the image above to see the other contributions. 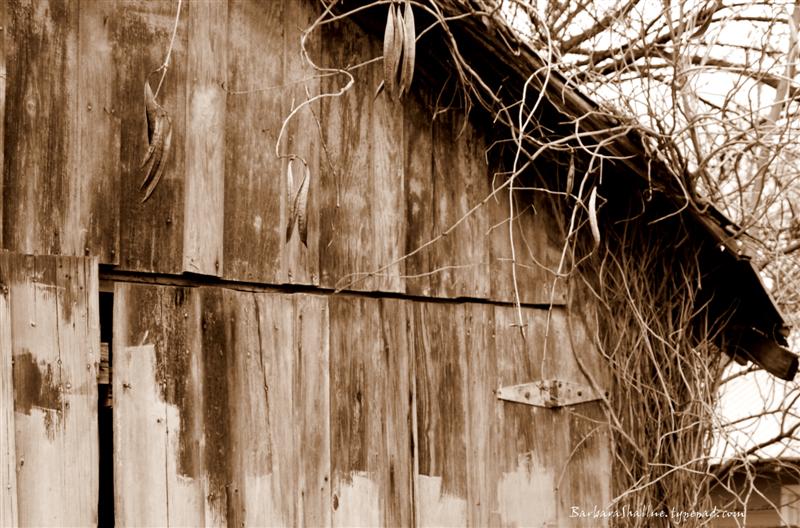 We parked in front of Grandma's tiny home and piled out of the car, the grownups heading straight for the porch. I lagged behind on the footbridge with my cousin; Poo swore she was not going to step a foot closer to that spooky place.

Grandma's house was gray, the gray of a dead oak branch still clinging to a tree full of green. That's what it reminded me of, because it sat nestled in the middle of her fig trees, her rose bushes, her gardens. To say she had a green thumb was like saying Jesus was a good swimmer. Grandma could grow anything.

Grandma was also blind. Someone had strung a rope between her flower beds so she could feel her way around to tend them. Heck, she might have strung it up herself, somehow. I only knew her then as a child knows a great-grandmother, which means about as much as you can know about a story from looking at the outside of a book, but over the years I learned she was smart, proud, stubborn, and unafraid of hard work. Unafraid, period.

While the grownups climbed the rickety steps and disappeared into the darkness of the fragile house, I tried to convince Poo it wasn't haunted.

I understood her wariness, though. It was hard to believe anyone lived in that weary place. If any paint had ever brightened those gray boards, time and weather had long ago stripped any evidence of it.

And I knew the inside wasn't much better. Unlike Poo, who lived far away, we lived just over the Ship Channel, and every few Sundays we'd drive through the tunnel to pay Grandma a visit. I dreaded it because of the smell of gas and old that slapped you in the face when you first stepped through the door, and the tiny bugs I could see crawling in and out of the old-fashioned key holes. We had cockroaches hiding in the dark places of our home (like everyone else in that area, including the rich) so I wasn't judging her. I just didn't like it.

Also, Grandma was blind, but not bashful. Merly, she'd say to my mom, how old is this girl now? Then using her hands she'd give me a thorough checking out (wink, wink) to see if my development matched my reported age.

Yes, I dreaded the visits.

But, still, I knew it was safe to go inside, and I knew we should at least make an appearance. She wasn't a soft, sweet-smelling, gushing-over-grandchildren kind of grandma - her cover was pretty worn and ragged, her face full of angles below a wild nest of white hair, her eyes cloudy yet intense - but she was our Grandma, nevertheless. Well, great-grandma, and great-great grandma, respectively.

There wouldn't be much to see once we crossed the threshold. I only remember three rooms: a bedroom to the left, a kitchen straight ahead, and the main room you step into from outside, and all I remember about the main room is a table where Grandma's record player sat (along with her spit jar.) The Lighthouse for the Blind sent her an audio record of the complete Bible, and my mother told me Grandma listened to it every day.

(I didn't know this at the time, but my older sister used to visit Grandma separately, sometimes taking her friends along. They loved visiting with this feisty old lady who'd outlived a whole century. I kick myself now for not spending more time with Grandma myself.)

And my eyes start aching every day; sometimes they twitch and spasm, and that reminds me to do my eye exercises, staring out the window at something far away, focusing on objects at different distances... but more and more it reminds me of Grandma. Of her blindness.

I'm not sure what caused her to lose her sight. I've heard she was an avid reader, just like me, and would devour books by gas light. Family legend said that's what did it, reading in dim light, but modern medicine has taken away that excuse.

Could it just be heredity, some stray renegade gene? I hope not. Don't want to think of that.

Aside from my eye exercises and trying to eat healthy, I don't think there's anything I can do to prevent it anyway. My job requires me to stare at a computer screen for hours, and in my spare time I'm a writer, staring at yet another screen. And that's that.

I can only hope that, if I do inherit Grandma's eyes, I also inherit her spirit that refused to let her blindness keep her from the things she loved. 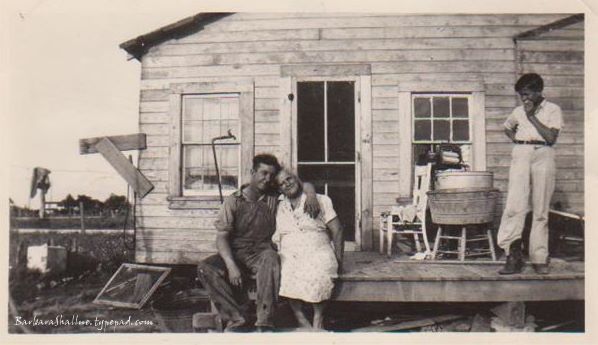 This post is my response to the Red Dress Club’s memoir prompt of writing about a memory and what it means to us.  At first I couldn't think of anything meaningful, but that's the beauty of these prompts - they start you thinking. And writing. Click the button below to read the other writers' contributions.