Taking a quick break to share this with you...

I'm writing. For the second day in a row!

Actually making a little progress, too, once I managed to ignore the voices inside my head who kept telling me to give it up, just quit, that it wasn't any good.

(Those first words after a few days away from my book are always the toughest. I need to stop staying away for days at a time.)

As if the voices weren't distraction enough, for some reason, I keep finding myself scrolling around on Facebook, but it's not toally a bad thing, because I came across the video below that a friend posted. (Thank you, Gina!)

It made me laugh so hard I just had to share it here with you. Ah, the memories.

Posted on November 29, 2012 at 01:37 PM in Call me mom, Family, Film, Indulgence, Inspiration and Heroes, Just for a laugh, Me and Him, My Evolution, Odd Jobs, Playing with words, Procrastination, Remember when..., Thurday's Random Thoughts | Permalink | Comments (19) | TrackBack (0) This bird didn't know where it was going!

Seeing its zig-zaggy tracks made me laugh - it's exactly how I feel these days, bouncing from writing my book to writing blog posts to photography to 'paycheck' work to blog-reading to my jewelry business to my personal history business to house stuff to to-do lists to emails to Facebook... and getting behind on all of them.

So last night I set the alarm to wake up at 4am this morning.

That would give me over an hour of writing time in a silent house. I hoped at 4am the wild-flying thoughts and words bouncing around in my brain would be tame enough to capture.

Then I calculated how much sleep that would give me if I rose at 4, projected myself through the rest of the day on so few hours of rest, weighed whether getting all of those things done I needed to do but couldn't focus on at night was worth feeling miserable all day and having huge bags under my eyes.

One day soon I'll have time for writing and sleeping - but much less money. Why can't time and money work together? It seems I never have enough of either one.

Speaking of droughts, it's still dry around here; my dust-covered car is once again attracting attention from random passers-by in parking lots... 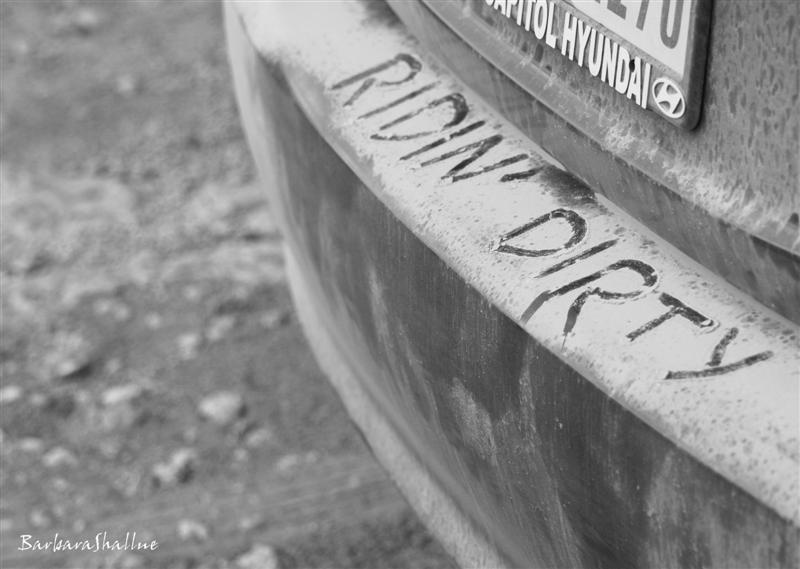 Hope today you get plenty of rain or time or money or whatever it is you need!

(And if you don't, I hope you can laugh about it! Remember, nothing ever stays the same. Just hang on!)

Were there no fools, there would be no wise ones.

There are days I'm grateful for the gray skies and gathering storm clouds because a blue sky would be a slap in the face, mocking the gray I feel inside.

There are days I feel I know everything, and days I realize I am a fool and know nothing at all.

There are days when I feel like a kaleidoscope of gem-colored shards, pieced together into ever-changing, yet beautiful, intricate patterns, and days I feel like a blur of indistinct, unformed images.

There are days the earth beneath my feet feels solid and I see the path I should follow, and days when the way before me is dark and the ground seems to crumble and shift with each step.

There are days I need to stay wrapped in this melancholy cloud and just think... days my soul needs to feel the falling rain.

There are days I wonder what the point of it all is, and days I realize I don't need to know.

There are days I know I need to keep walking as long as I'm able and hope I'm heading in the right direction.

I am a flower quickly fading... here today and gone tomorrow... 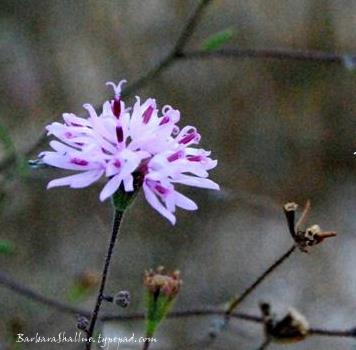 Tags: Casting Crowns, depression, faith, melancholy, Who am I

I remember when MTV first aired. (That's how old I am.)

I would just watch and watch and watch, one music video after another, mesmerized. Even when I was forced to leave the room for some reason - to eat or sleep or take a potty break, for instance- I would keep it on just to hear the music.

When I was pregnant with my firstborn, we bought a foreclosed house and moved. We opted not to connect to cable in our new home; Tom was a returning college student, so we were down to a single income and wanted to save money where we could - we were about to become a family! And all that stuff they showed on cable - lord have mercy, we didn't want our kids watching that!

I missed those music videos, though, so you can imagine how excited I was when Tom recently discovered Cool TV! It's just like the old-time MTV, airing one music video after another, including some of the old ones we watched almost 30 years ago - except it's on network television! It's free!

The next best thing to having your own work published or promoted is seeing your friends succeed, and this weekend I get to witness the work of my friend Amory Casto come alive on the stage of Salvage Vanguard Theater. Yay! Congratulations, Amory!

Check out the promo... and if you're in the Austin area, come see it!

Small town love isn't as simple as it should be. Charlotte is a quiet girl, who wants nothing more than to simply love and be loved by her boyfriend Gabe, a recent jailbird who wants nothing more than to walk a straight line. Charlotte soon discovers that he has returned a different man than the one she fell in love with. Heartache turns to fear when she decides one day to meet Finley, a wondering optimist in an open field.

Tickets are $12 and can be reserved online at www.hydeparktheatre.org. Once on the HPT website, click on "See full Long Fringe schedule". Scroll down the page--What You Touch is Gold is second from the bottom. Then reserve them tickets!! (All tickets must be paid for in cash/check at the box office before the show)

What You Touch Is Gold, a new play
Written & Produced by Amory Elizabeth Casto
Directed by Lindsey Sikes

My eyes are itching. Click HERE to find out why.

Damn juniper, cedar, whatever you want to call it...

The past few mornings our walks have swung down to our pond. We've had a visitor lately and I'm trying to capture him/her with my camera. But it is just too dang sly and fast for me...

Can you see it hiding from me in the weeds? When I took this, it was in the gray of dawn and I was standing pretty far away. I could barely spot its eye through the weeds and just hoped when I snapped the shot that I was capturing something in the frame. 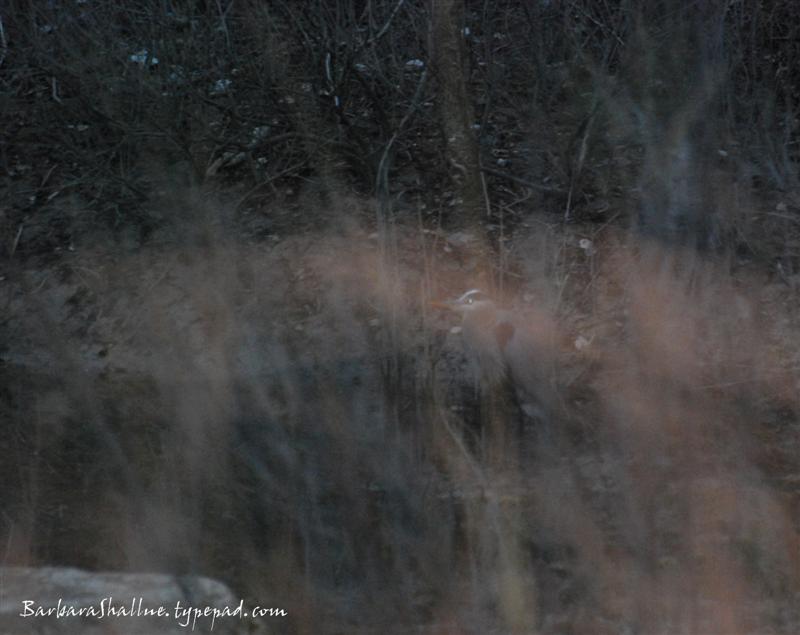 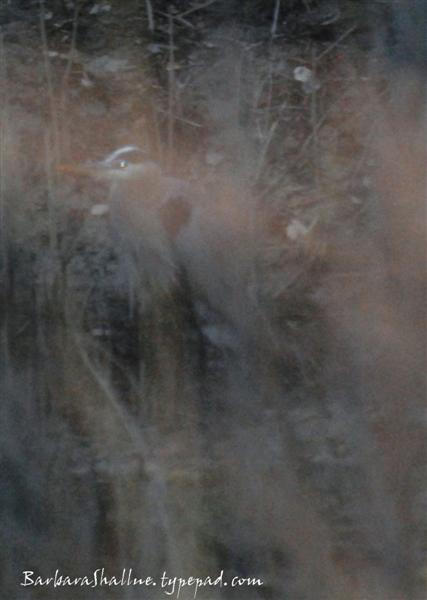 About this time, Belle and Max spotted it and headed closer. The jig was up and the heron decided to scram... I started snapping and, considering I was yelling "No Belle! No Max!", and it was still dark, and I was moving and still pretty far away, these didn't turn out half bad... 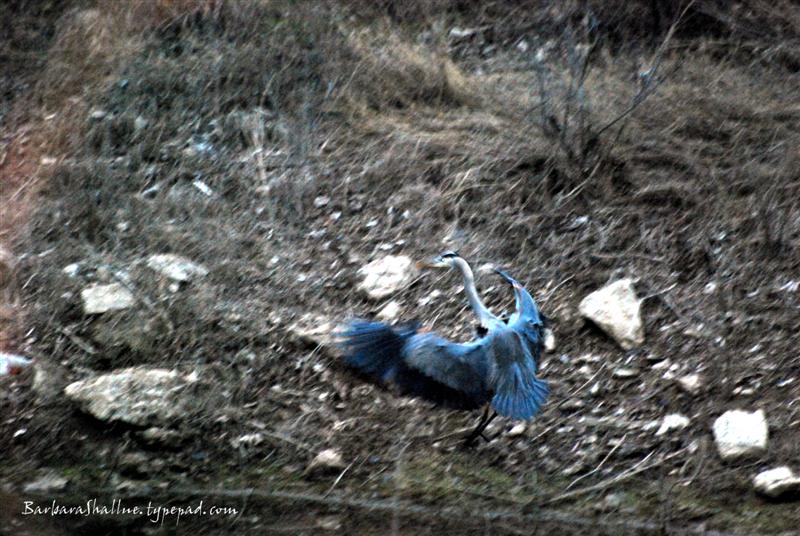 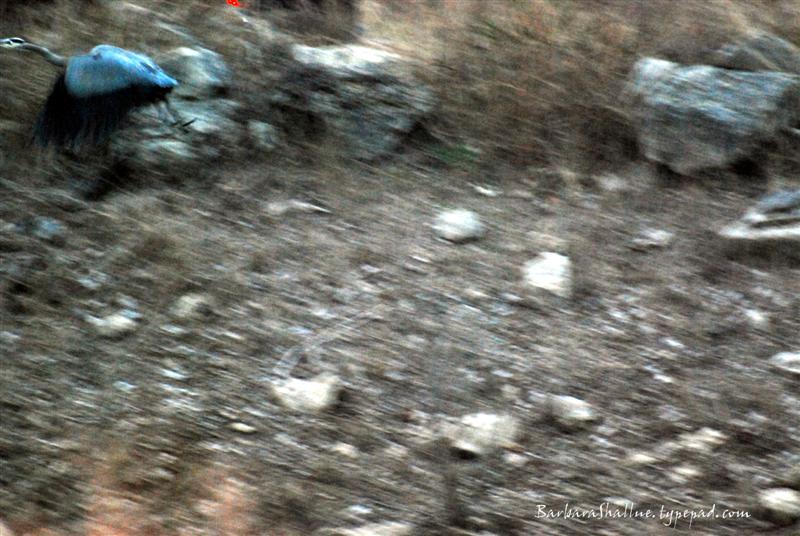 Dang heron. I'll get a good photo of you yet...

If you had ten extra free hours a week, what would you do with them?

This is what I've packed into my two extra hours per day:

And that's it. But that looks like a lot to me. Right now I'm kind of enjoying that extra time and I'll try to remember this tingly feeling when I take a look at my paycheck tomorrow...

All this time I thought I had a Facebook page, and it turns out it was just some sort of Insights Page. (Why?) Anyway, now I have a Real Facebook page, so if you're on Facebook, and you're so inclined, look me up! (Long Hollow website)

I came across this video on Recommended Daily Dose and it cracked me up because I love ridiculous stuff like this. I had to share it in honor of my friend Mary Kay, even though she never reads my blog. She's a huge Josh Groban fan (he touched her hand once at a concert and she didn't wash it for a week! She's also in love with Matthew McConaughey, but that's another story...)